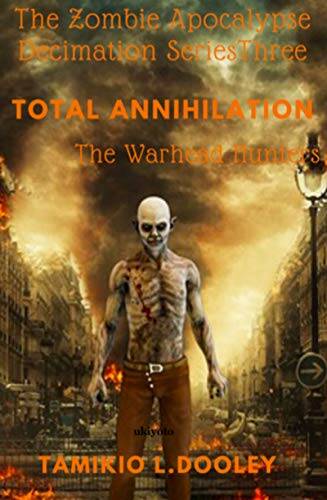 The war between humanity and inhuman is far over. The later mortality of the poison escapes Seymour, Texas. Traveling to Terlingua, Texas for the ultimate crisis, the Warhead Hunters, known for kicking zombie butt, promises to resolve the sick zombie plague once and for all. Will the blood massacre stop there? Or will the epidemic transfer to a separate part of Texas wiping out the entire state? Jake Gallagher, the chief of the Warheads Hunters, thinks not! The fearless party takes one last expedition into Texas to put a resolution to the meat-eating demons. Taking the intelligence that Dr. Ron Bone and Theo Sosa’s created in their preliminary methods to save humankind from death, the souls become bloodthirsty racing machines that will stop at nothing! Join the Warhead Hunters in their ultimate expedition to stop the dangerous pathogen in book three of Tamikio L. Dooley’s The Warhead Hunters: The Zombie Apocalypse Decimation Series “Total Annihilation.”